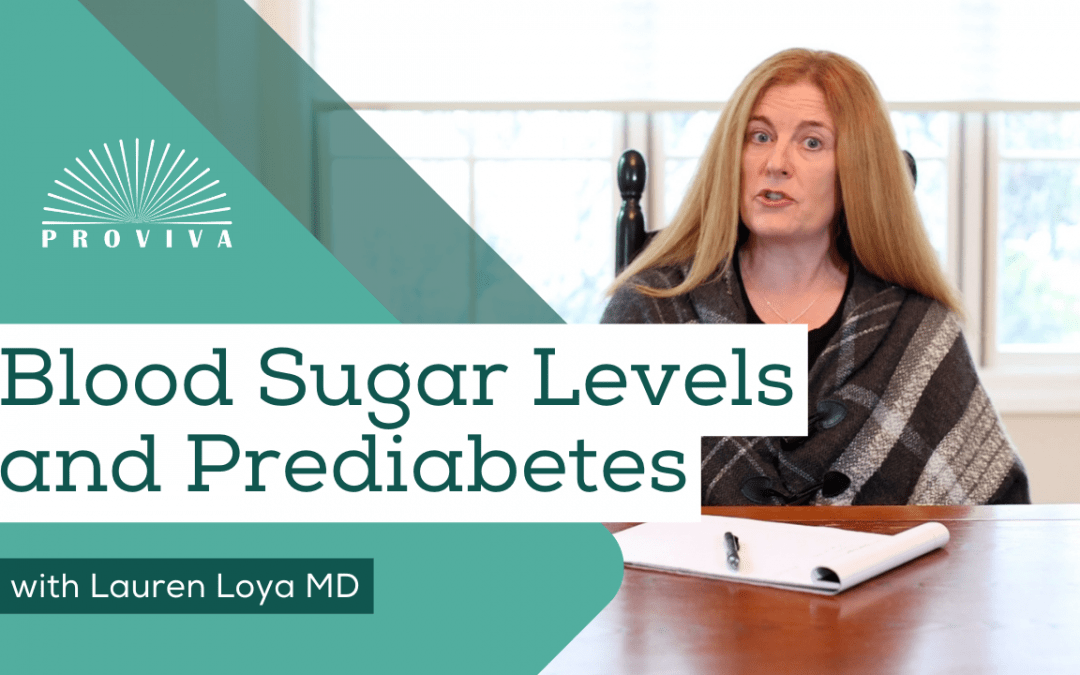 Problems around the regulation of blood sugar and prediabetes is one of the more common problems that I see in our patient population. There are 70 to 80 million people with prediabetes in the United States– and pre-diabetes means that your blood sugar levels don’t quite reach the level that is needed to diagnose diabetes, but they certainly aren’t normal.

So first, I wanted to talk a little bit about how we get to that point where the blood sugars are abnormal, but not yet in diabetic ranges. Long before that, there is often a 10 to 15 year period where insulin becomes dysregulated and the body can become resistant to insulin. Insulin is a hormone that is released from the pancreas in response to meals that might be high in sugar or carbohydrates. Even protein can cause the pancreas to release insulin.

Every cell has receptors for insulin and then for sugar. The job of insulin is to bind to those receptors and then open the gates so that sugar can enter the cells. Sugar in the form of glucose is very important because that’s fuel for our body, for our muscles, for our brains, for our immune system, for our gut.

Every system relies on that sugar– so sugar is not necessarily a bad thing. However, in our Western diet that is very high in sugar, processed foods, and saturated fat. What ends up happening is we have much more carbohydrate load than we need for our energy expenditures through the day. So it takes more insulin release when we eat a high sugar, high carb food to get the sugar out of the bloodstream and into the blood.

The cells slowly stop listening to that insulin signal.

I use the example of sitting in a room having just eaten a banana, and you put the banana peel in the trash. For the first 5 or 10 minutes, you smell that banana peel because it’s a pretty strong odor. But after you sat in that room for an hour, you’re not going to smell it anymore because the body becomes adapted to that response.

The same thing happens with insulin. So over time, (10 to 15 years) it takes more and more insulin to keep the blood sugar normal.

Insulin, when you’re not using it for the carbohydrates and for energy, as those levels rise, starts to give the body the signal to store fat. So we start to gain weight and hold on to weight, and it becomes harder and harder to lose weight.

So you’ve got this 10 to 15 years of developing insulin resistance. Eventually, even the higher levels of insulin can’t get enough sugar out of the blood. And that’s when we start to see the fasting blood sugar rise. A longer term measure of the blood sugar is something called a hemoglobin A-1-C, which is a three month average of your blood sugar levels.

This tells us how much sugar is glommed onto your red blood cells. Red blood cells live in the body for about three months before they’re destroyed. So it gives us an idea of what have the sugars looked like for the past three months. Once the blood glucose and the hemoglobin A-1-C start to rise, you’ve already had this problem of insulin resistance for years.

The next step in the process is the next 5 to 6 years. If nothing is done, people will go on to develop Type 2 Diabetes.

The good news is, all of this is reversible with both lifestyle management, supplements, dietary changes, exercise, as well as even medications that can help prevent that progression to diabetes and help reverse some of that insulin resistance.

One of the keys, and the thing you can’t avoid, no matter what else you decide to do, is diet and nutrition.

Sugar has invaded our lives. It’s a drug. It changes our brain so that we want more of it. When we eat it, it releases dopamine just like many other illegal drugs. But it’s super legal. The more we have, the more we want. Cutting out sugar, and when I say sugar, I don’t just mean what’s sweet–the candy, the cakes, the cookies, the pop. All those things are sugar, but so are pretzels, chips, bread, and pasta. Anything that has been refined into a flour and made into a product is absorbed in the body as sugar very quickly.

Cutting those things from the diet, limiting them in the diet, and really focusing on what’s coming in is vital.

What we want in a diet is 5 to 7 servings or cups of vegetables a day, maybe a fruit or two. In this stage you have to be careful with fruit. It’s better sugar, but it’s still sugar. We need to cut added sugar down to no more than 20 to 25 grams a day. The U.S. government has told us up to 50 grams of added sugar a day is okay. But once people are in this cycle of insulin resistance and pre-diabetes, you must cut to a much lower level. Making sure that if you’re going to have a grain, it’s a whole grain, and really limiting those foods in the diet short of cutting them completely.

Cutting many foods from the diet is a very hard thing to for people to do. You might have heard of a keto diet, a diet that cuts almost all carbs. With the goal of achieving ketosis. It can be very effective in reversing pre-diabetes and insulin resistance. However, it’s very hard to sustain. So picking something that you personally can implement as a consistent system and live that way over the long term is vital.

The next key is exercise. Exercise brings sugar into the cells as your muscles need them to use right away without requiring insulin. So it’s a great way to get some of the sugar and carbohydrates mobilized out of the bloodstream without needing more insulin to do so.

Sleep is another key. When we don’t sleep at least 7 hours a night, our fasting insulin levels rise, our fasting glucose levels rise. So poor sleep is a risk factor for blood sugar abnormalities.

Finally, stress management is key. We’ve discussed the effects of anxiety, adrenal dysfunction, and high cortisol levels previously. But stress also effects sugar production. Cortisol prepares the body for action in response to a stressor, and when that cortisol goes to the liver, without even being aware of it or even consuming sugar or carbs, the liver is going to make sugar in response to cortisol. So managing stress is a final lifestyle management tool to help with blood sugar and pre-diabetes.

There are supplements that can help target blood sugar, help improve the insulin sensitivity, and how well the body can use insulin and sugar, and address the glucose levels.

In some cases we can even use prescription medications, most commonly metformin for a period of time, to help reverse some of that insulin resistance.

There’s a wide variety of things that you can start on your own now to get your blood sugar under control, and decrease your risk of progression to pre-diabetes and diabetes. 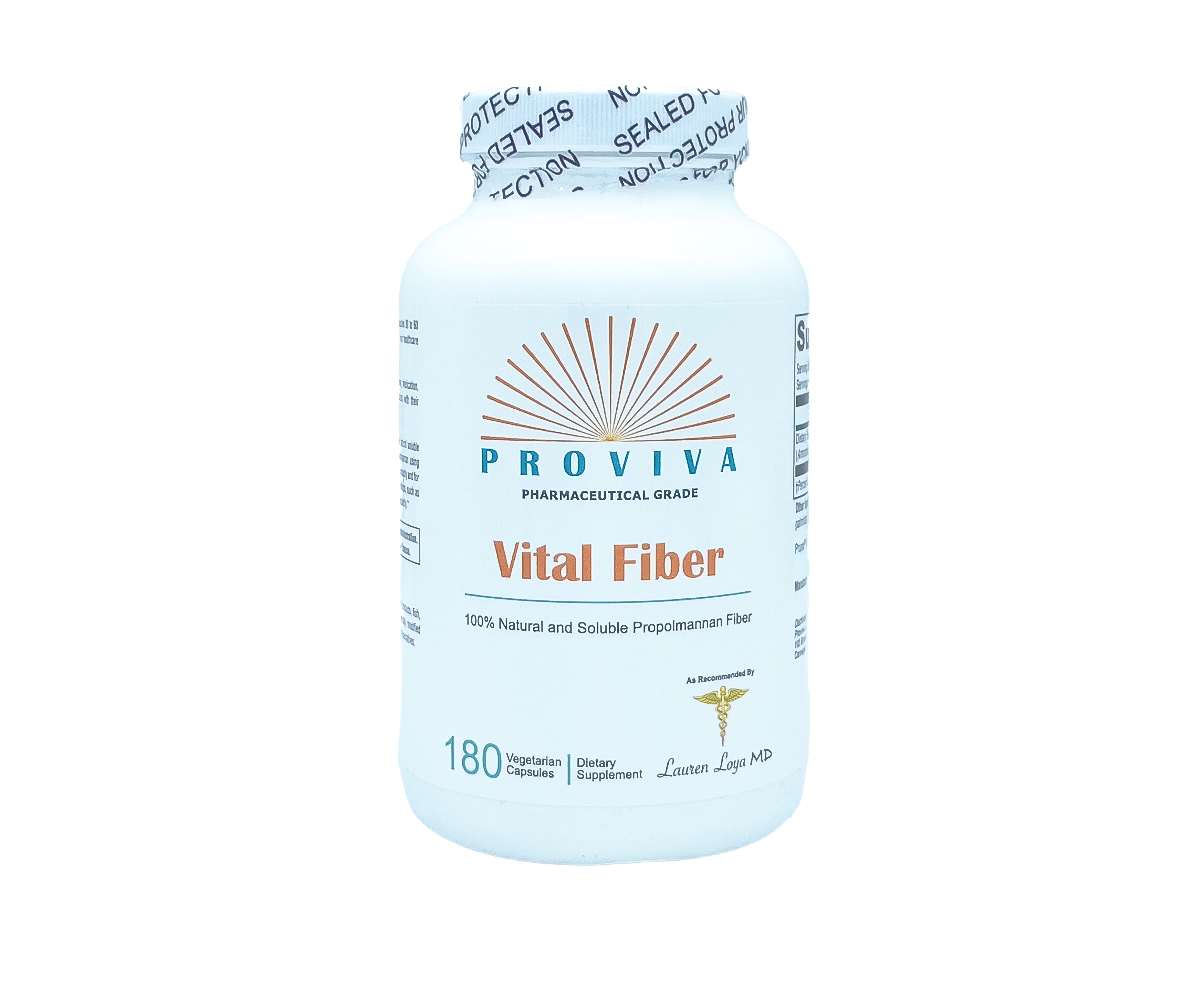 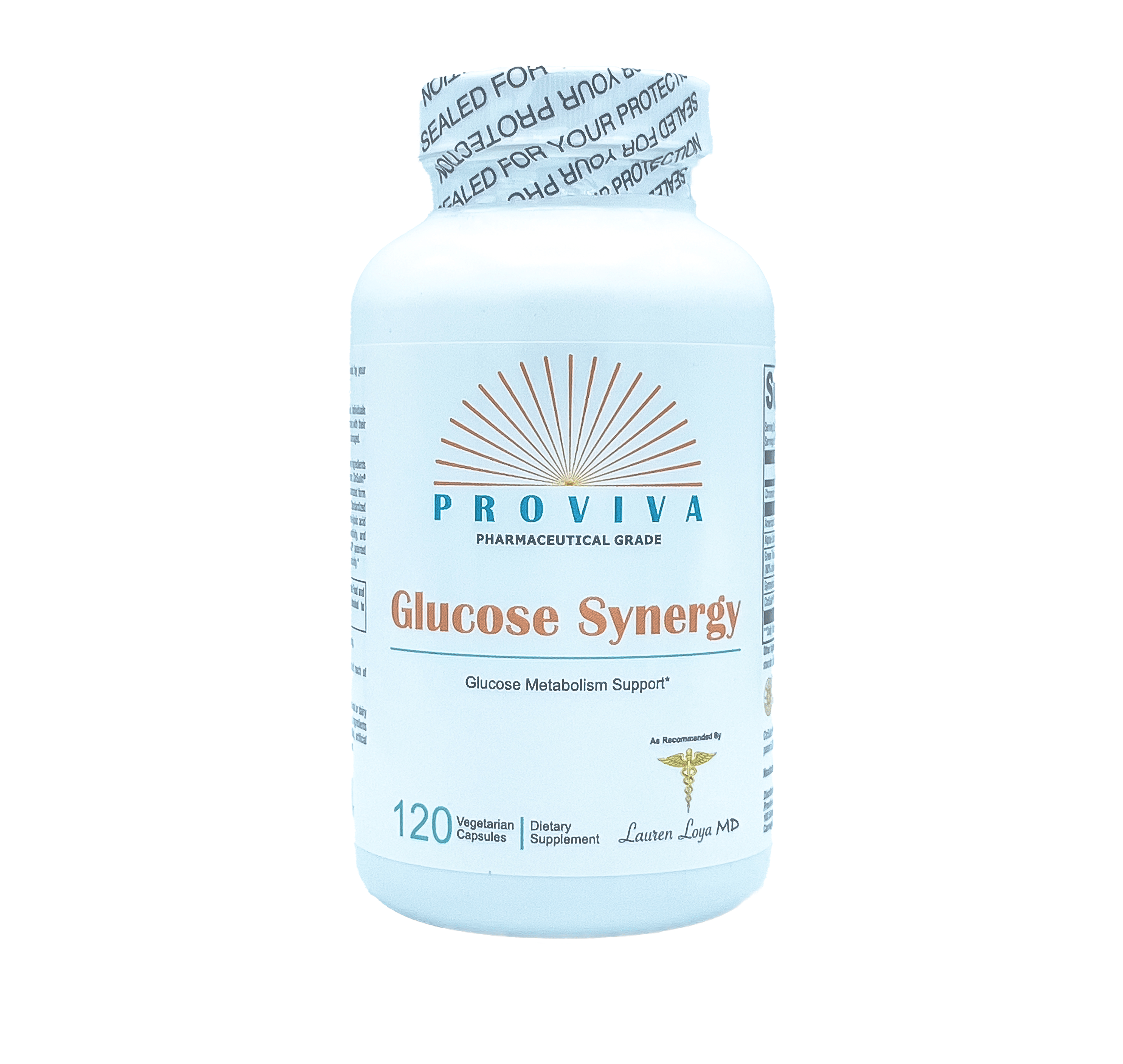 My bloodwork results have improved greatly since I started taking Proviva supplements. I highly recommend! Take control of your health with supplements rather than just relying on medicines that sometimes... read more help one issue but cause another with side effects.

Shopping cart
There are no products in the cart!
Continue shopping
0